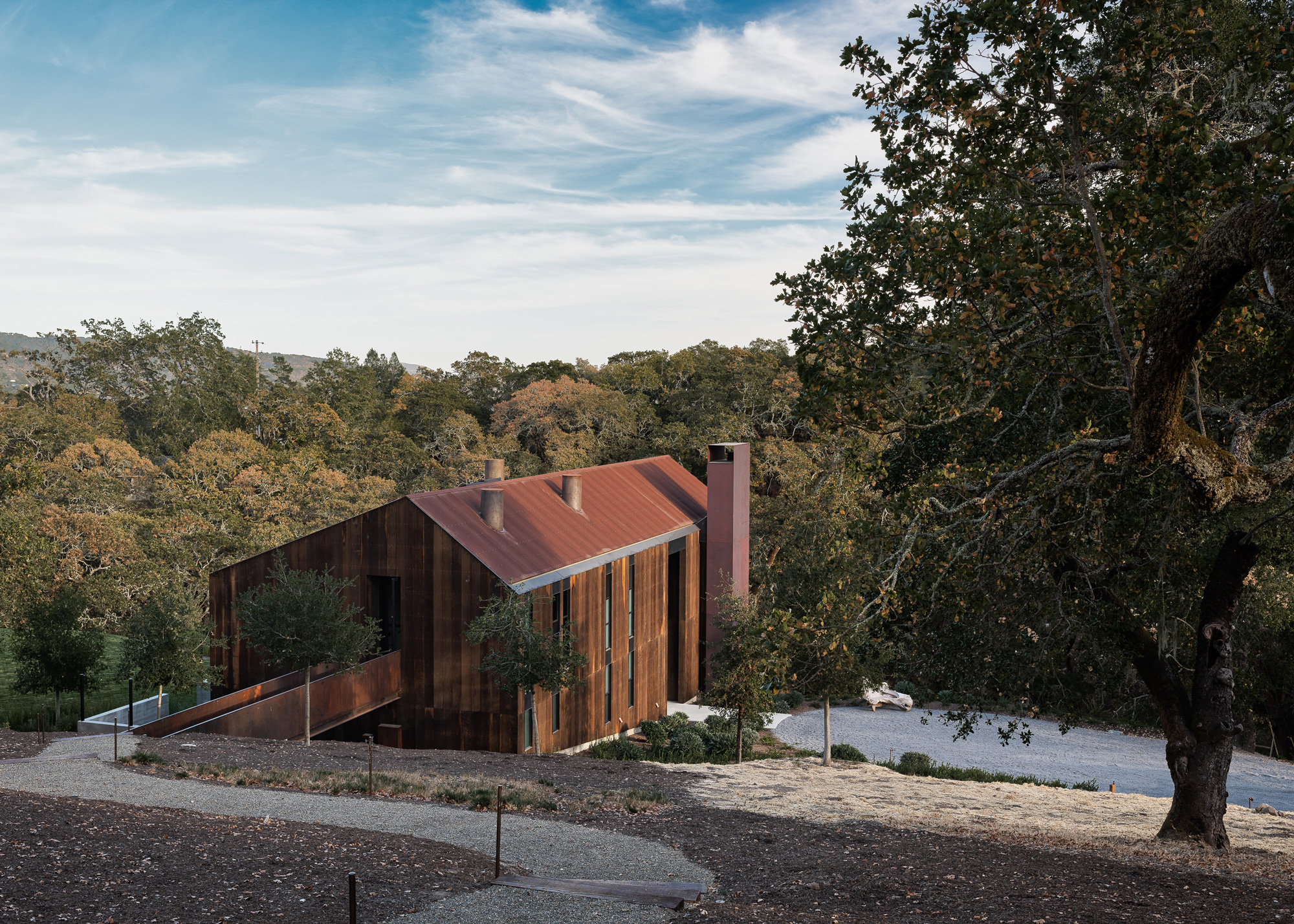 From the Architect - North of San Francisco, in Glen Ellen, a less populated part of the Napa wine country, the culture has been based on agriculture and was named for an original winery. Jack London made this his permanent home here in the early 1900s. Drawn by the land, London believed in the redemptive qualities of rural life. Less than an hour from the City, rolling hills covered with groves of oak trees surround the downtown. The strong agricultural history has affected the built environment here with many examples of barn like houses that are confusingly morphed between the two vocabularies. On the existing footprint of a 1950's ranch house, this family getaway evolved in response to a request for a retreat from their urban lifestyle. The atmosphere of a tack barn renovated into a bunk house on site inspired thoughts of a larger barn like typology for this main house of 3,900 square feet.

The request from the client was to build in a consistent way within the rolling hills dappled with agricultural buildings. A simple, rectangular, two-story form emerged with an asymmetrical gabled roof. The shorter side of the roof faces the southwest sun and reduces heat gain to the structure. Fenestration is limited to this exposure as well and is organized like thin full height ventilation shutters that reference traditional barn building. The entry, a larger version of the vertical slit elements is recessed for shading. The fireplace and chimney, foreign to the barn typology, is displaced from the structure with glazed joints. The east side is more open to the view and morning sun. A continuous, building-sized assembly of steel sash glazing includes large sliding doors that pocket into the adjacent wall and open the kitchen to the rear terrace. The upper zone of the main space is void of windows and reminds one of the empty shell-like spaces of barns. A large vertical wood shutter located on the southeast gable end is aligned axially with an internal access through the plan on both levels. When open at both ends, prevailing breezes flow through the mass cooling it naturally. In order to leave the hillside intact and avoid grading, the form is excavated into the site uphill and cantilevered over it downhill. A steel grated bridge connects the upper sleeping level with the hillside and tack barn above. A minimal material pallet of reclaimed redwood, corrugated Corten steel and black steel sash windows combined with integral gutters, and lack of overhangs further the minimal feeling of the construction. Inside the singular materiality is continued via California Oak for floors wall and ceilings. 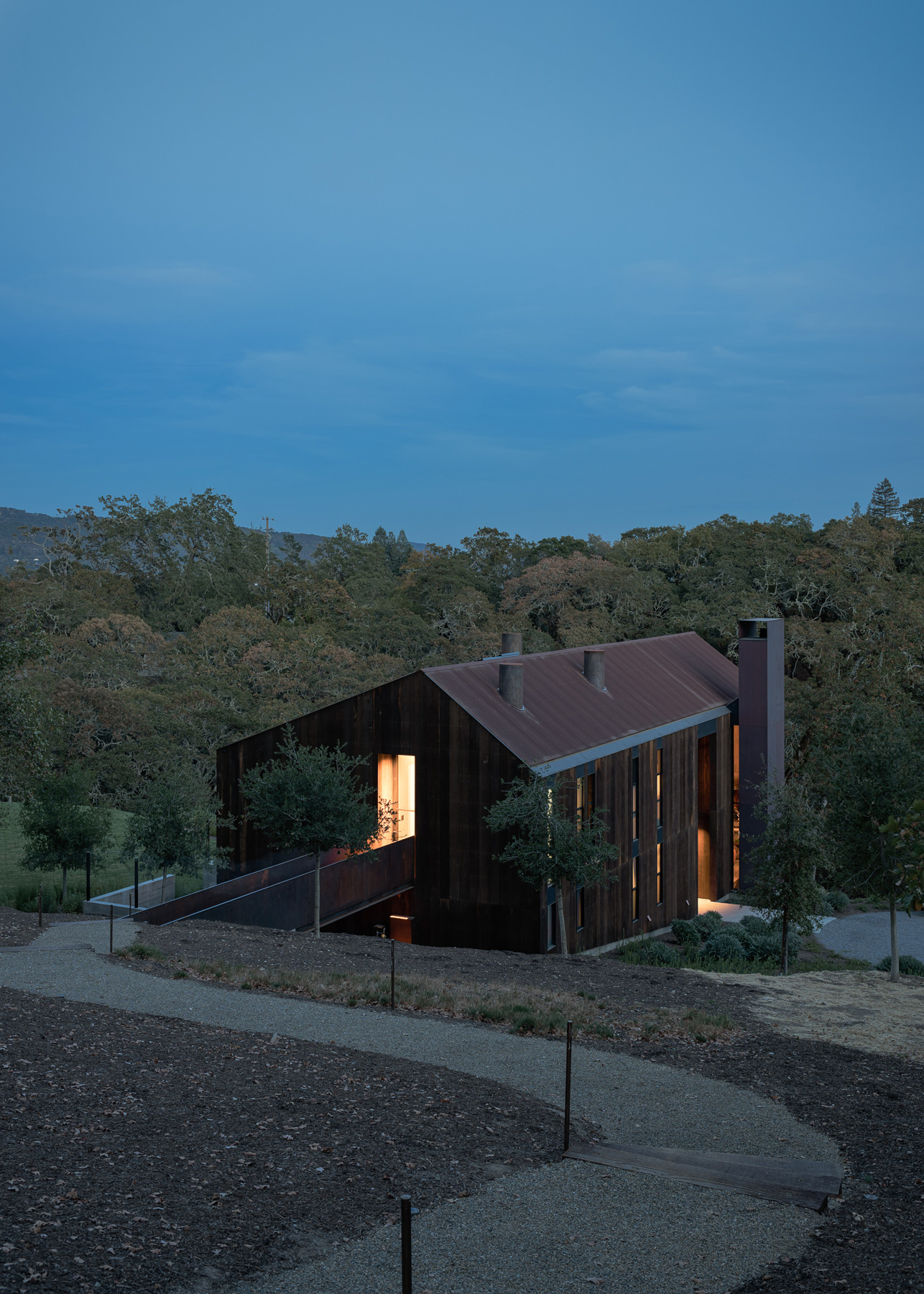 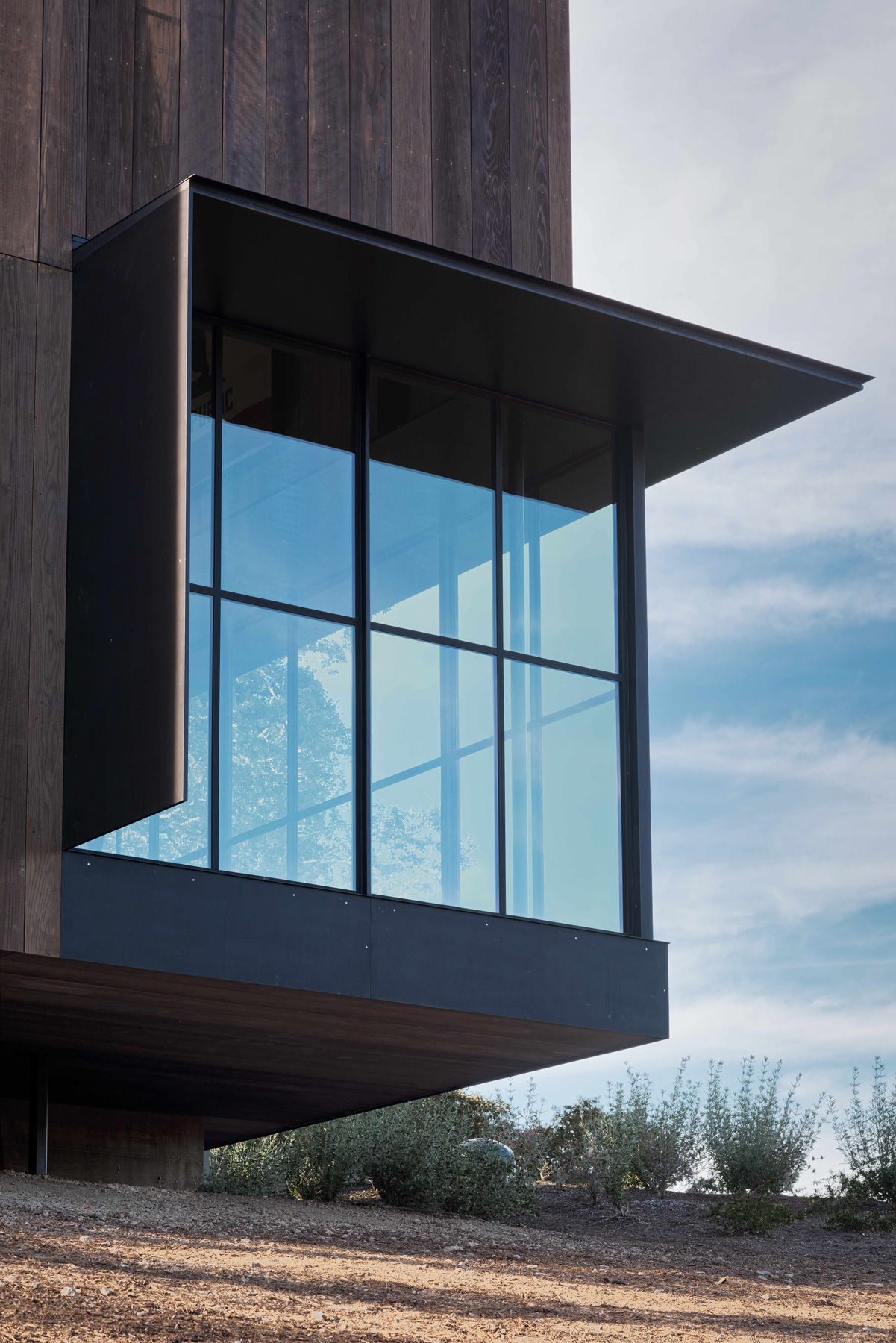 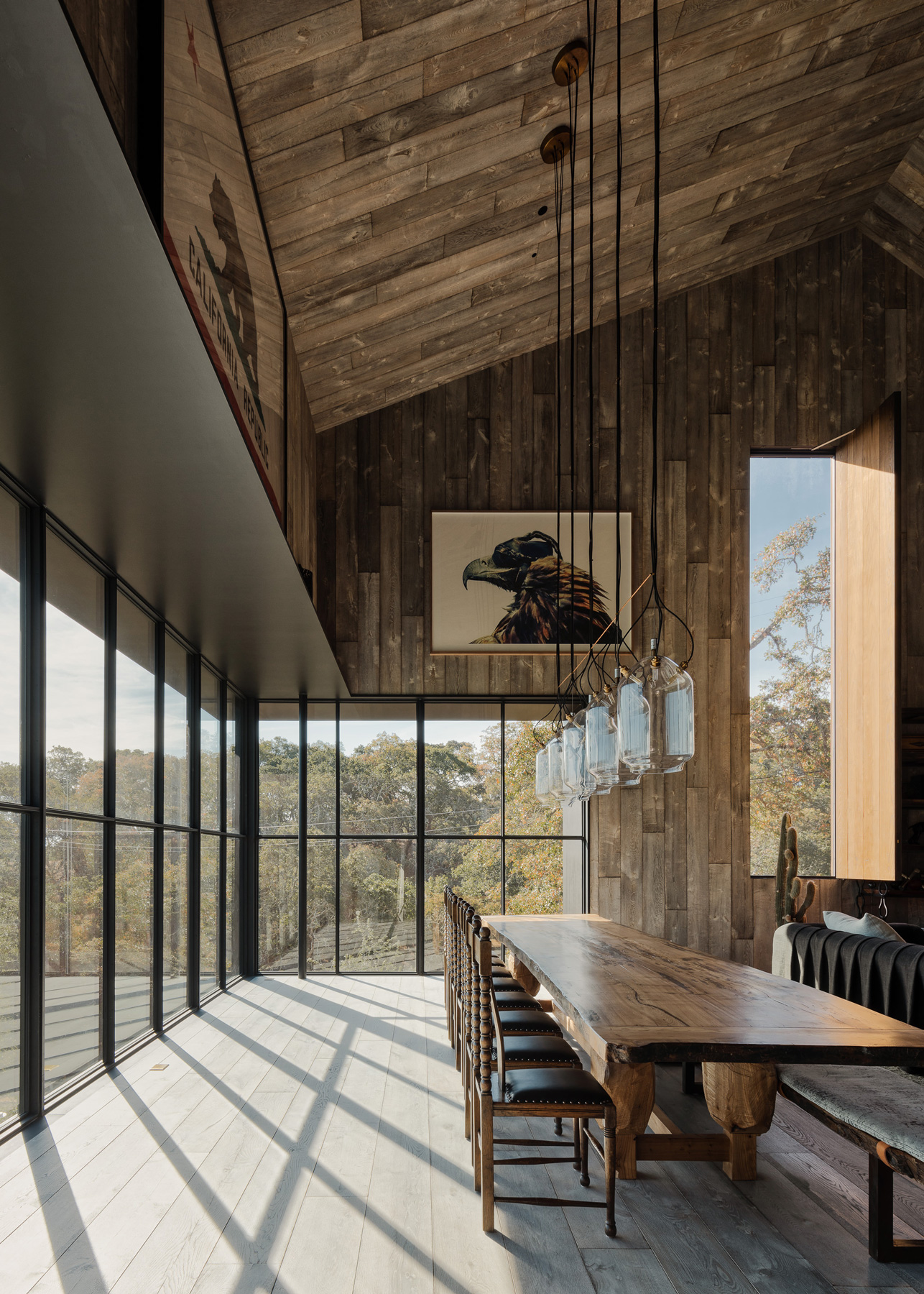 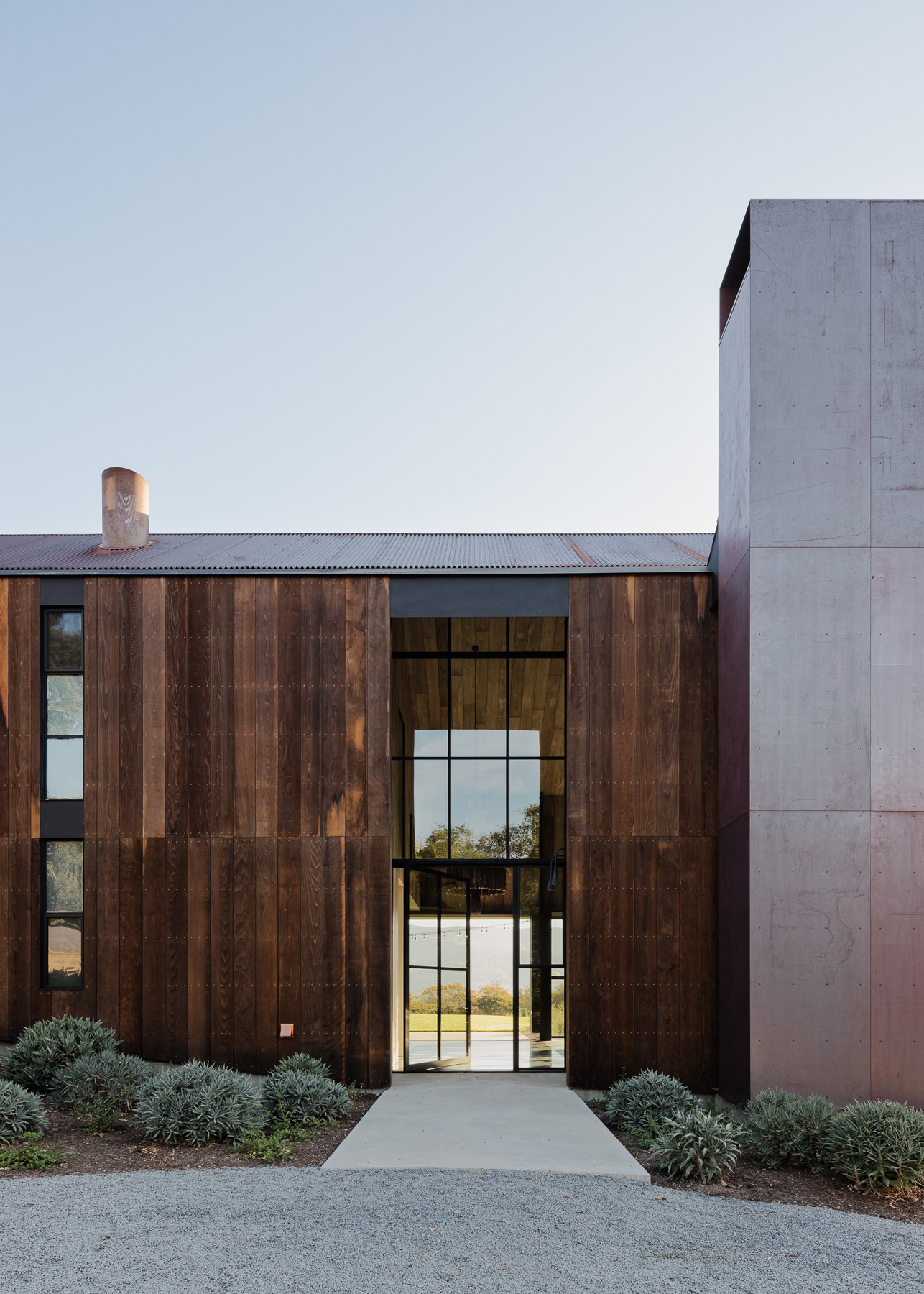 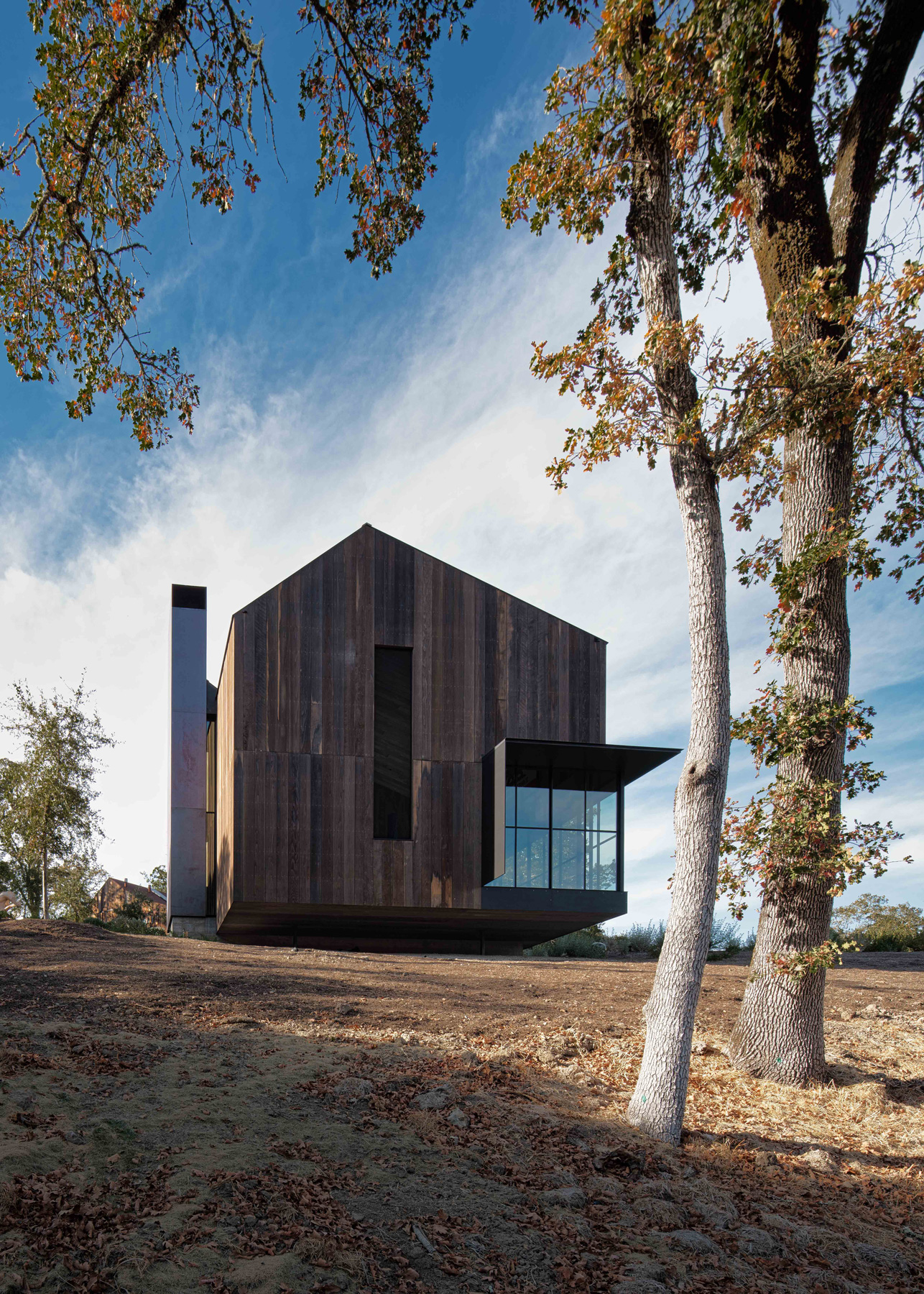 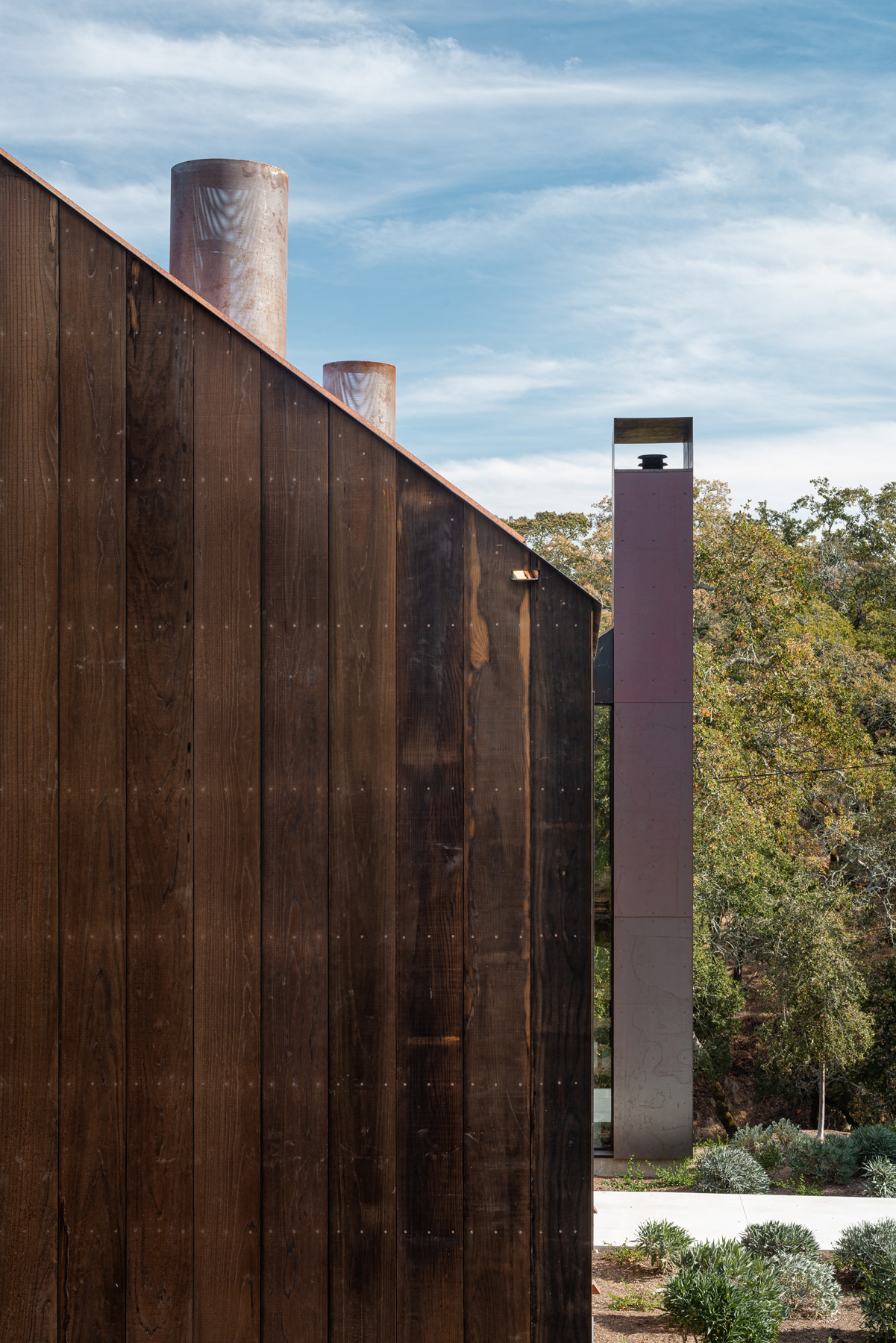 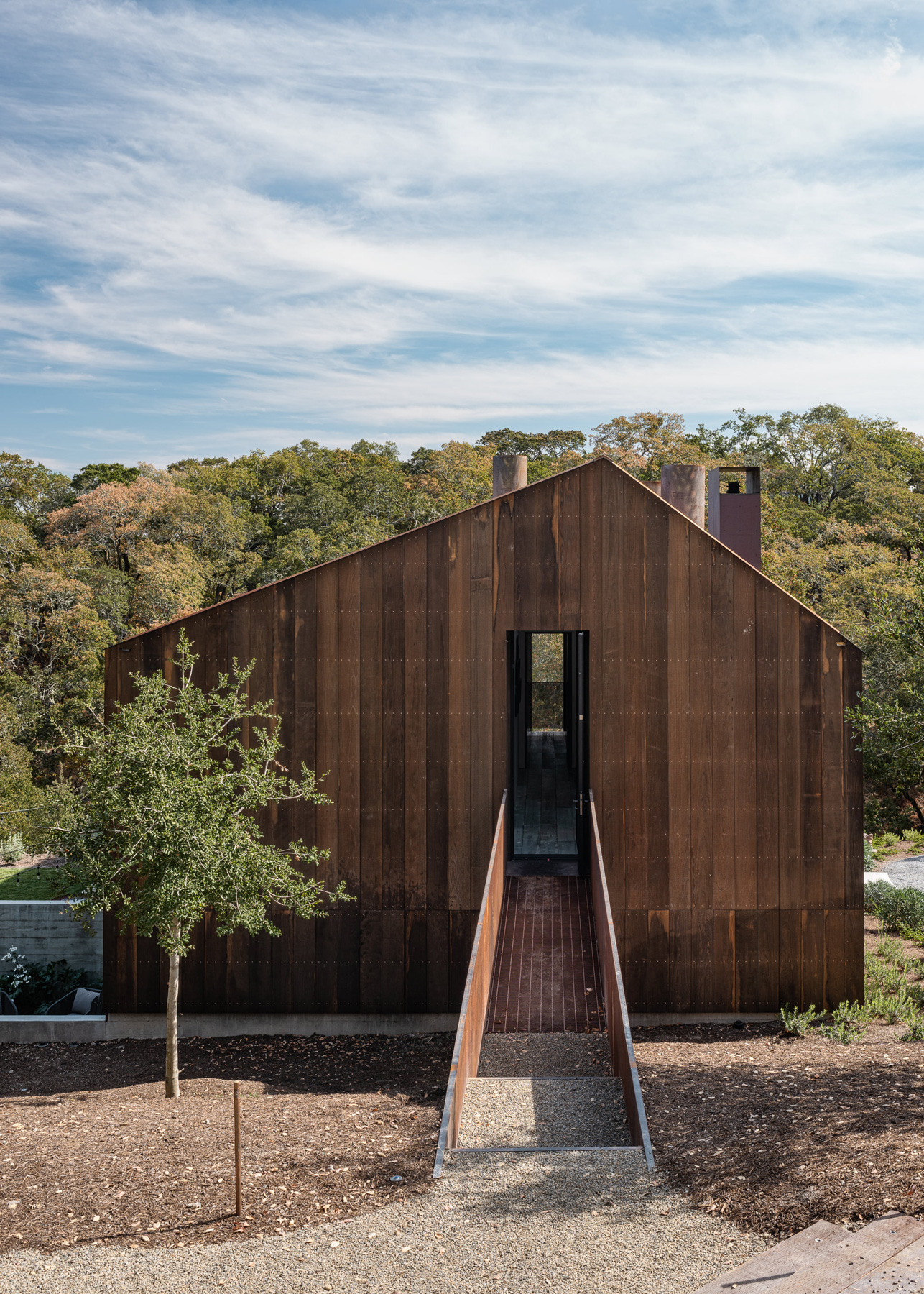 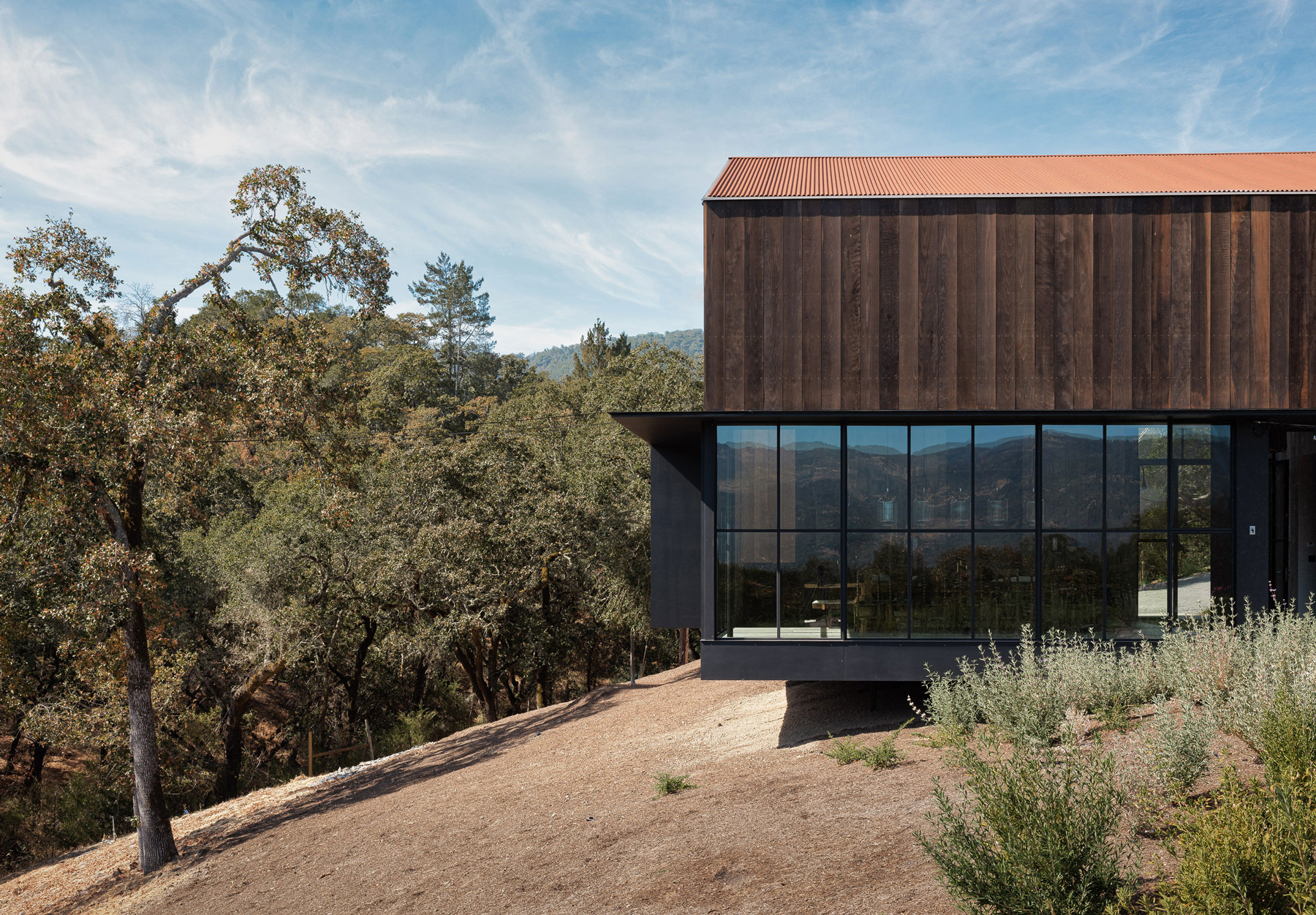 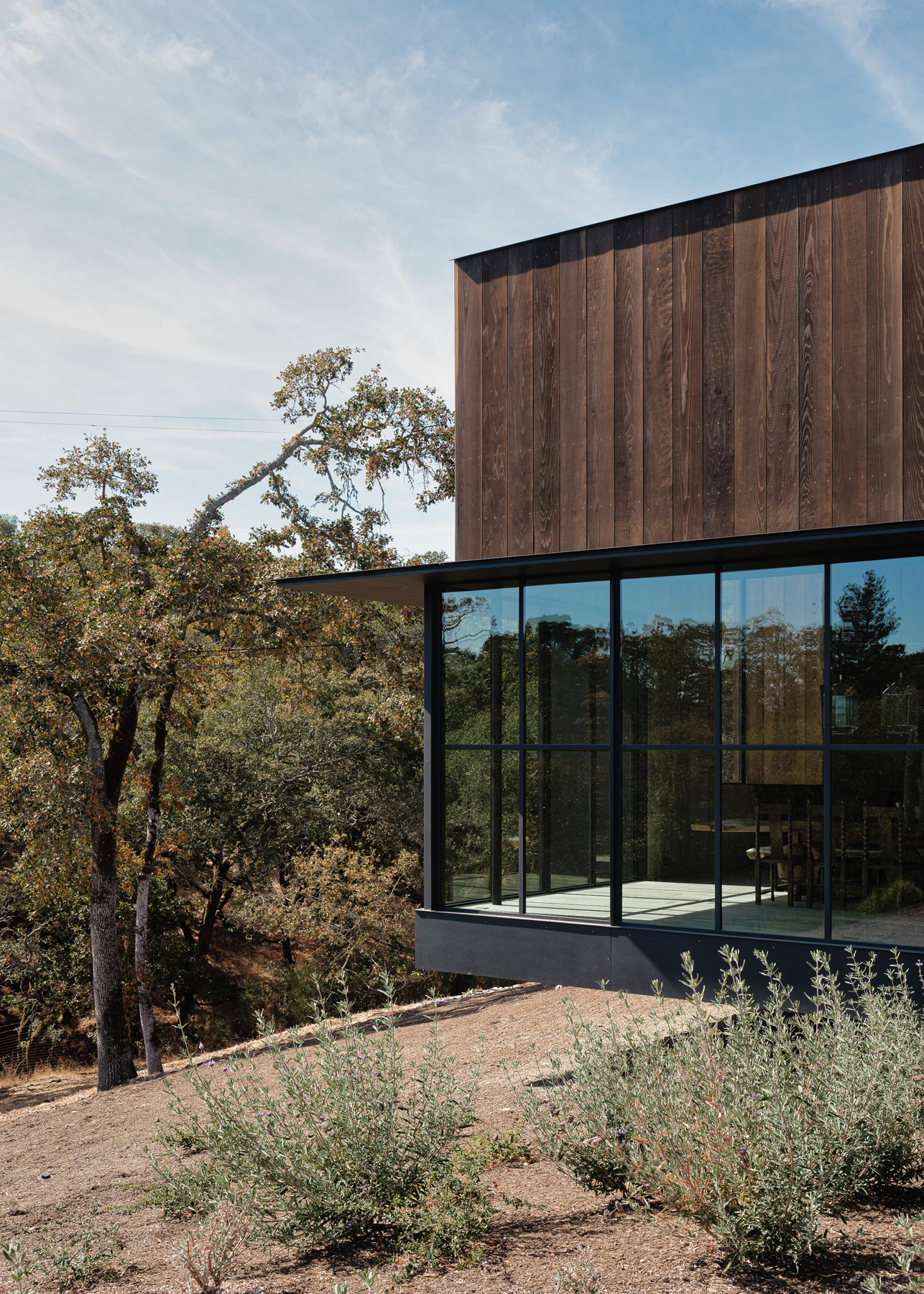 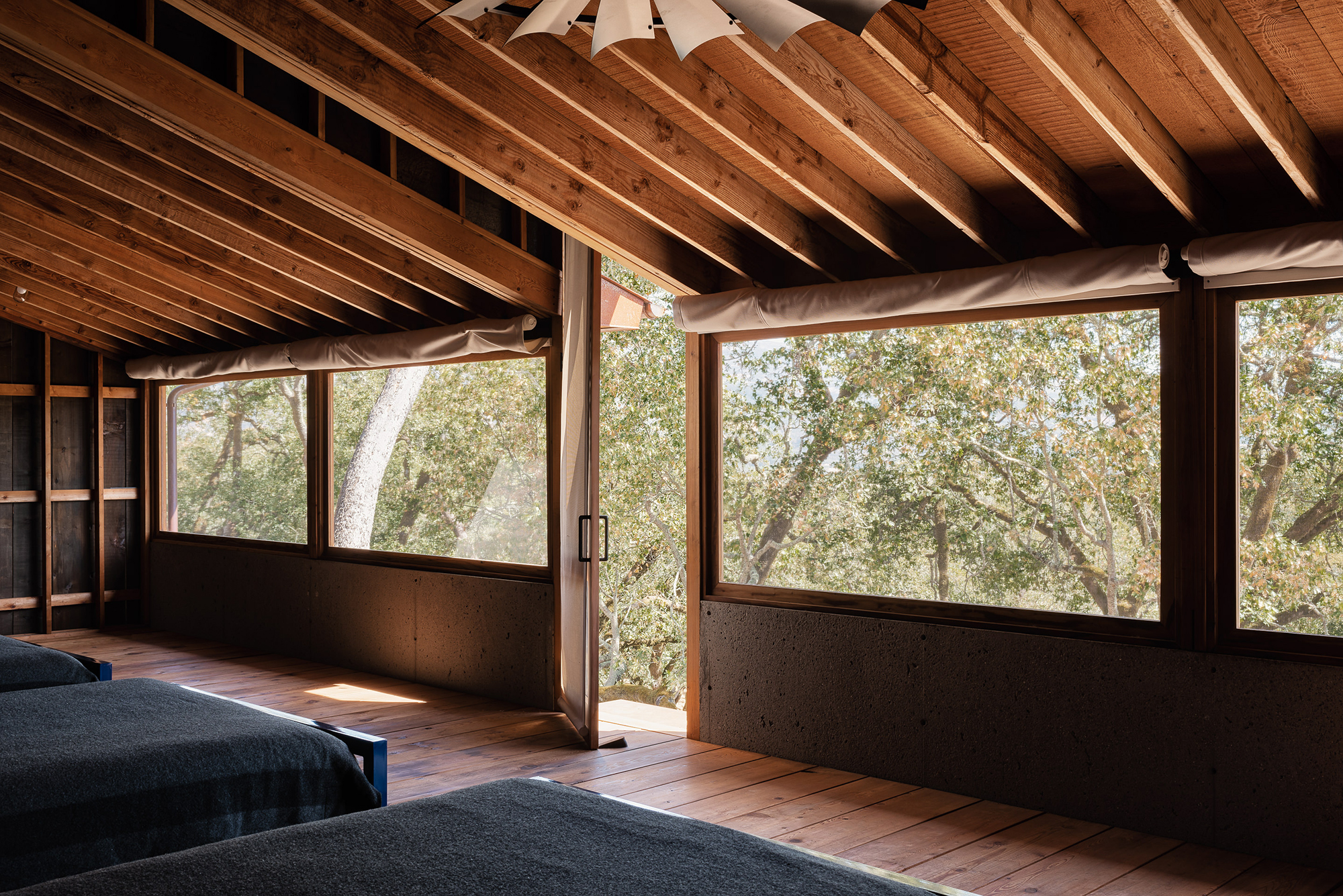 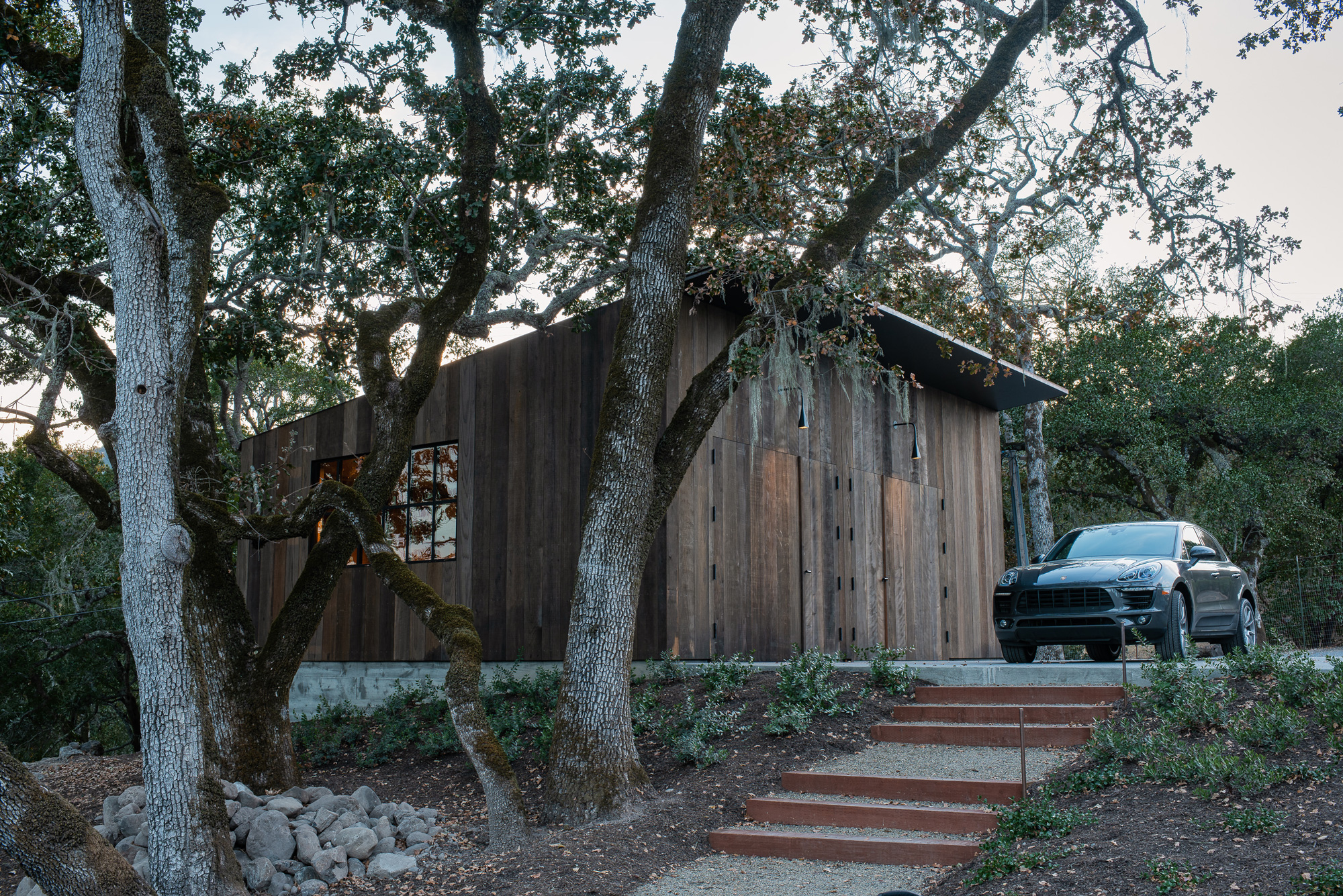 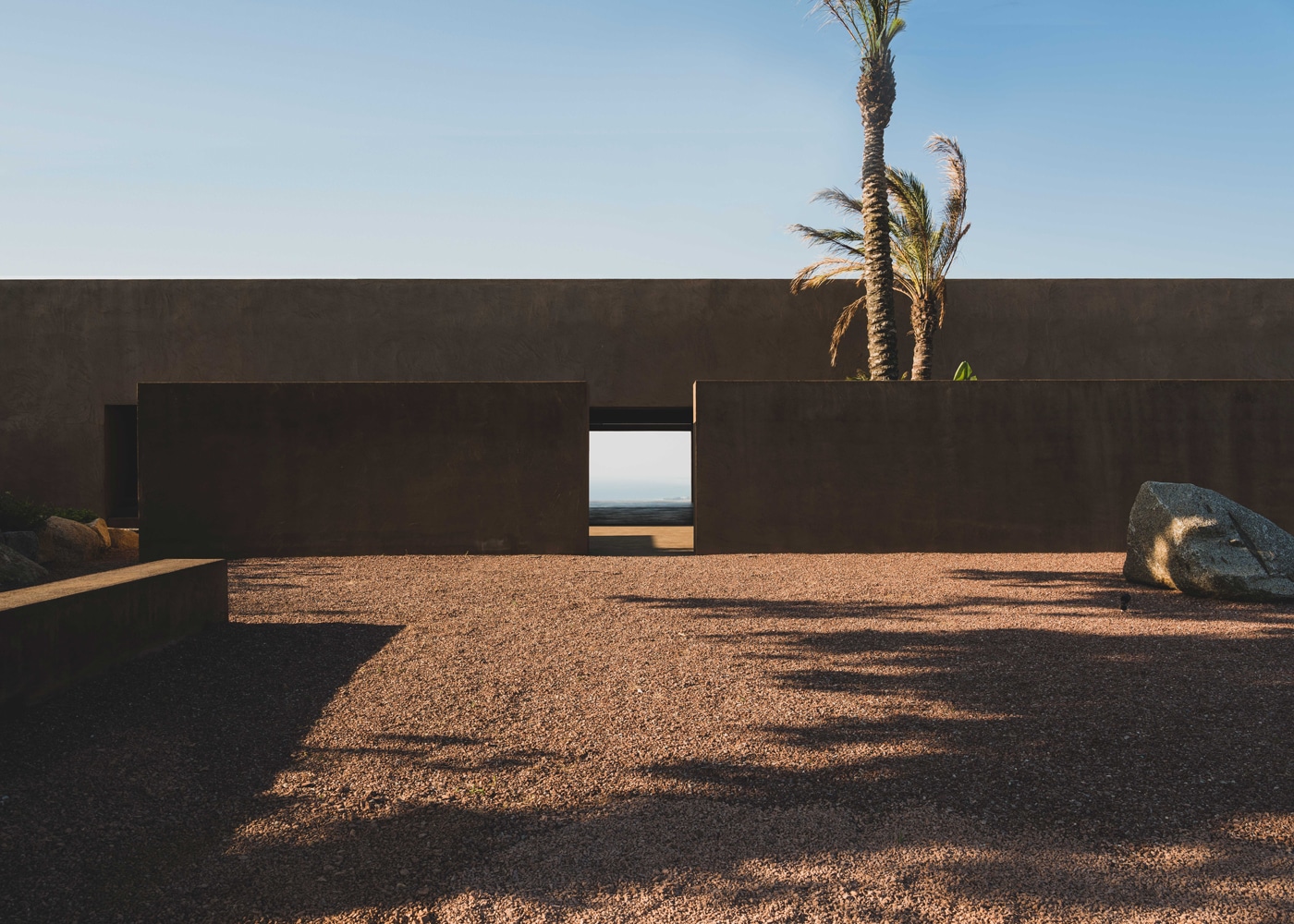 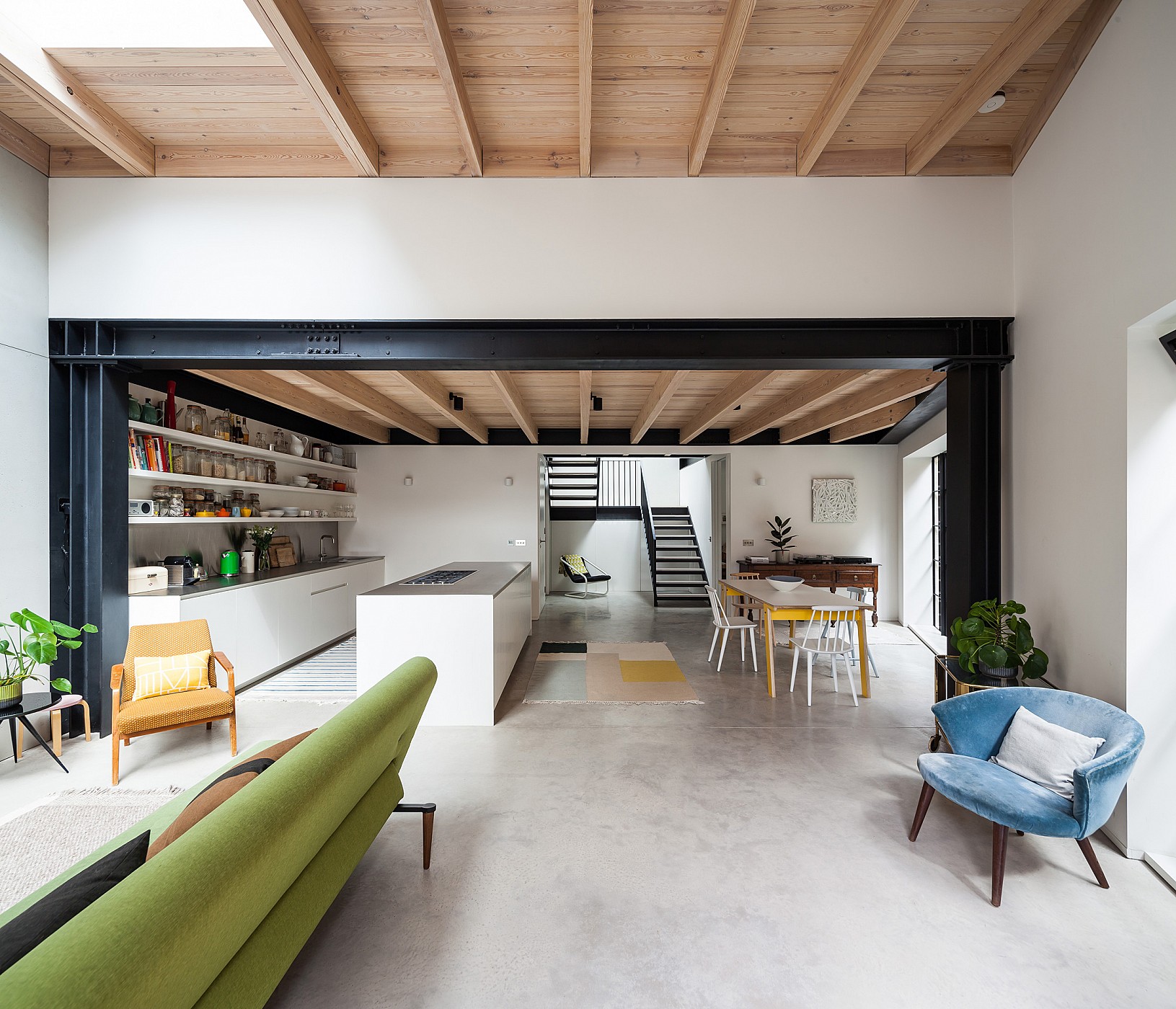 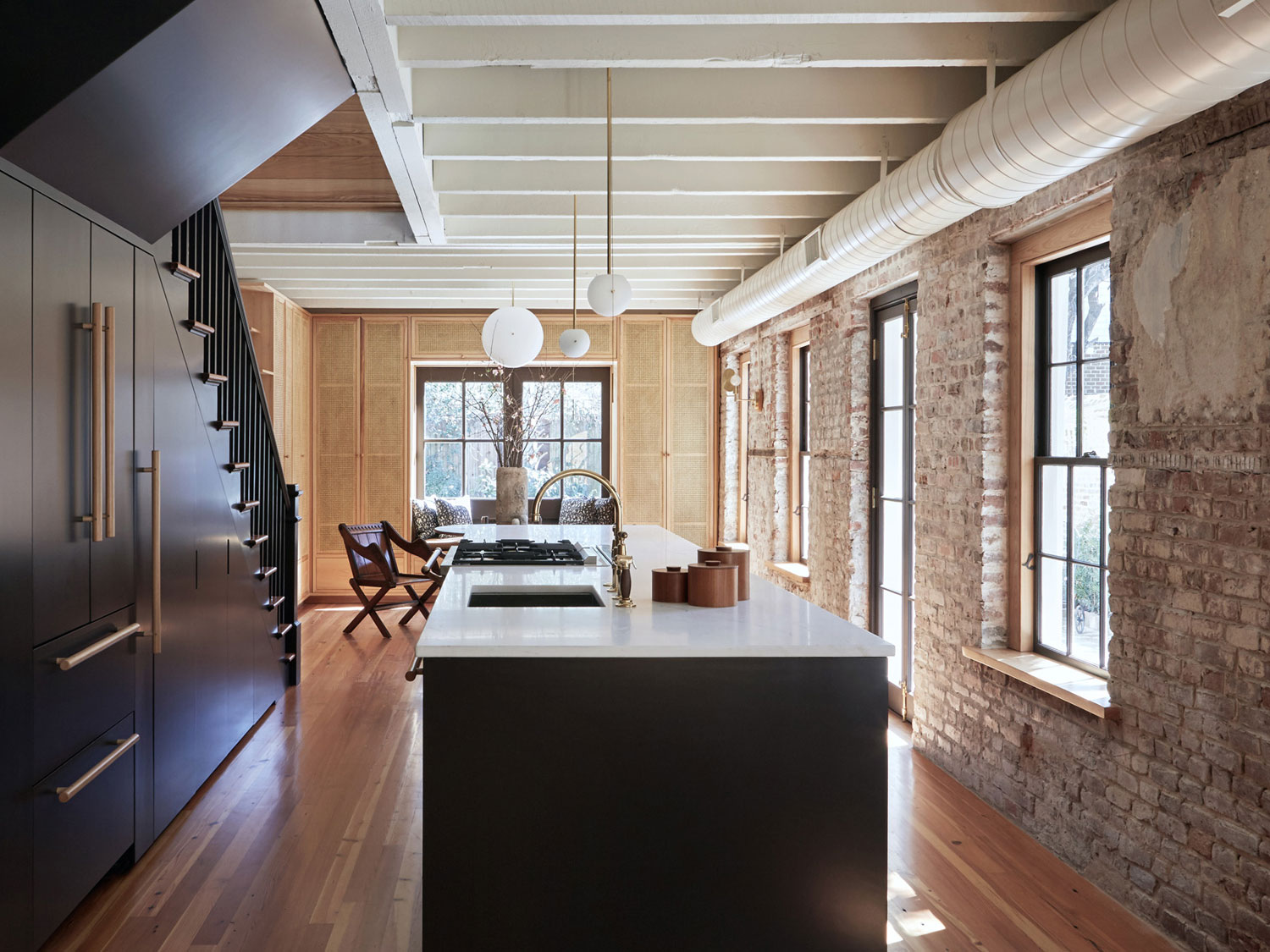